I’ve wanted to visit The Eternal City since I was old enough to think–when my days were filled with old Hollywood sandal-flicks and my first books consisted of illustrated Biblical scenes with bad guys wearing plume-y galea helmets. Growing up Italian-American, there is a sense of worship-fullness when it comes to Rome–it was the seat of the Roman Empire for centuries and, in generalized terms, my motherland. Rome was where the idea of an Italian was truly born (Quite literally with the Congress of Vienna and in 1871, Rome became the capital of the Kingdom of Italy) and it’s history my own. I wanted to be Roman and feel the experience of thousands of years of living in one place in time all around me. In 2016, due to a sudden change in travel plans, I had only enough time in Rome to stand and marvel in front of The Coliseum and to take a quick walk to the Trevi Fountain before hopping into our rental car and cruising to the airport to fly back home. I’m excited to say that I will soon find myself back in less than a week. For, as they say, all roads lead to Rome–including my own.

”Here was Rome indeed at last; and such a Rome as no one can image in its full and awful grandeur! We wandered out upon the Appian Way, and then went on, through miles of ruined tombs and broken walls, with here and there a desolate uninhabited house: past the Circus of Romulus, where the course of the chariots, the stations of the judges, competitors, and spectators, are yet as plainly to be seen as in old time: past the tomb of Cecilia Metella: past all inclosure, hedge, or stake, wall or fence: away upon the open Campagna, where on that side of Rome, nothing is to be beheld but Ruin. Except where the distant Apennines bound the view upon the left, the whole wide prospect is one field of ruin. Broken aqueducts, left in the most picturesque and beautiful clusters of arches; broken temples; broken tombs. A desert of decay, somber and desolate beyond all expression; and with a history in every stone that strews the ground.” – Charles Dickens [1]

So where does the idea that ‘All Roads Lead to Rome‘ come from, anyway? It’s an idiom that’s been passed down from generation to generation essentially meaning–doesn’t really matter how you do it, everything will arrive to the same conclusion. How inspired was this phrase and is there any truth to it?

If we go back far enough, we find the idea appearing in Medieval writings from Chaucer to theologians. Appearing nothing more than a stray observation by French theologian/poet Alain deLille in the 12th century: “Mille viae ducunt homines per saecula Romam” or for those not fluent in dead languages, “A thousand roads lead men forever to Rome.” [2] And, of course, Chaucer being a poet of renown was sure to take inspiration in his work as well to include a mention of the Roman city–

And god wot, that in alle thise langages,

and in many mo, han thise conclusiouns ben suffisantly lerned and

-Geoffrey Chaucer, Treatise on the Astrolabe [3]

But even here, it seems the idea of roads leading to Rome is similar, in a sense, to my own experience that there is simply a calling to the city–one that many of us–as lovers of History, or food, or vibrant culture, or awe-inspiring art–cannot resist. And even through its long life–from kingdoms to republics, to empires and upheavals, from religious institutions to repeating the order of things all over again in tandem–as history has shown us, there has always been a sense of desire to reclaim the city as one’s own. 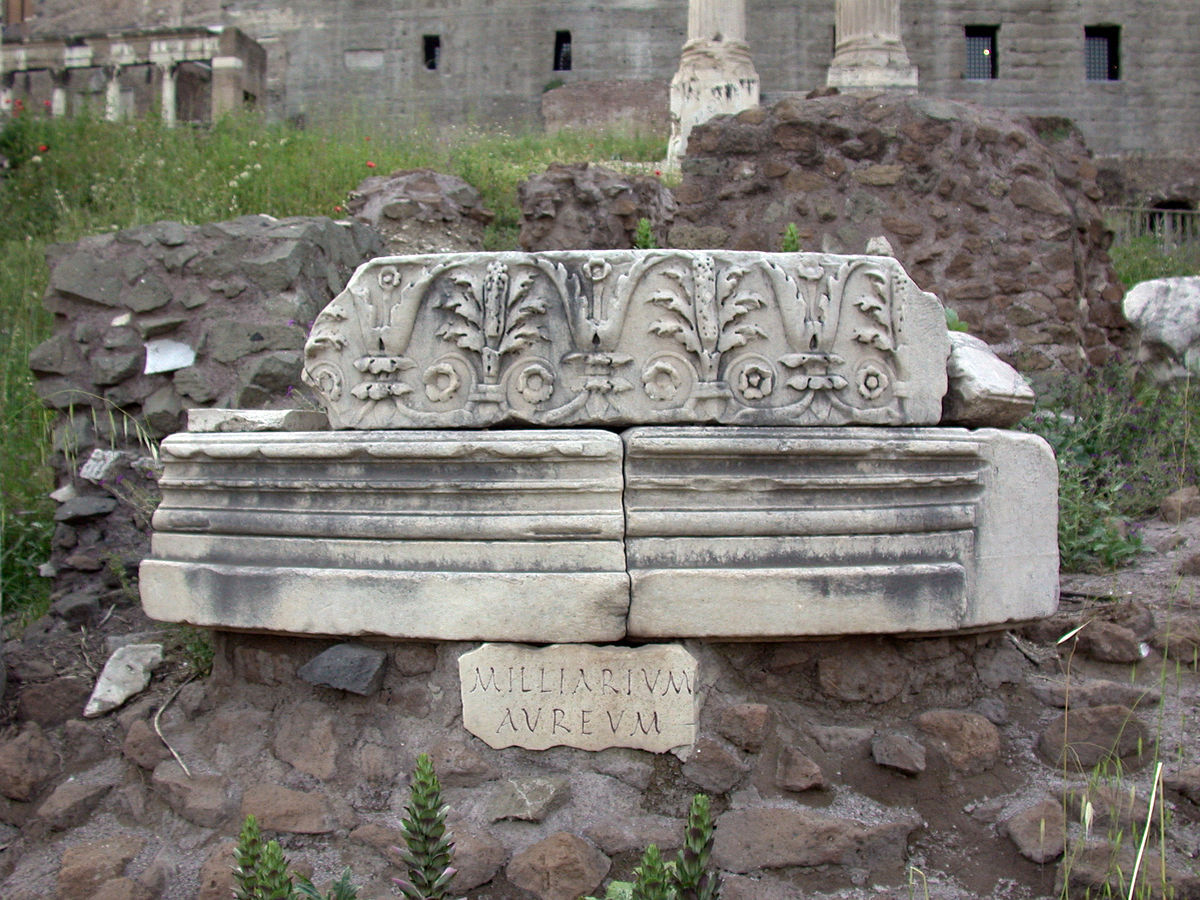 The Milliarium Aureum or Golden Milestone

However, there may be some truth to the phrase as from Cassius Dio [4], Plutarch [5], Seutonius, and Tacitus–we do learn of a column that was commissioned by Augustus Caesar to serve as the convergence point of the Roman Empire. A point where all roads began from and all distances there-in were measured by it, linking the network of the Empire together like a spiderweb. So, in a sense, all roads in the Roman Empire certainly did lead back to Rome.

All roads pointed towards the Imperial City, and started from its Milliarium Aureum. [6]

Either way, I’m pleased to share that my journey once again leads me back to the beating heart of Italy. As with my other travels, I’ll be updating my blog daily with pictures and tidbits so stick around and hit that follow button if you want to keep up with my quick romp through Rome, Florence, and Venice–typically posted at unreasonable hours, of course.

And as the saying goes, I hope that one day, dear reader, your road leads you to Rome as well.

[4] “Now all this was done later in commemoration of the event; but at the time of which we are speaking he was chosen commissioner of all the highways in the neighbourhood of Rome, and in this capacity set up the golden mile-stone, as it was called, and appointed men from the number of the ex-praetors, each with two lictors, to attend to the actual construction of the roads.” – Cassius Dio, Book 54, paragraph 8, line 4.

[5] “With the remark, then, that he had bought an old house and wished to show its defects to the vendors, he went away, and passing through what was called the house of Tiberius, went down into the forum, to where a gilded column stood, at which all the roads that intersect Italy terminate.” – Plutarch