I have a tendency to weep over beautiful things. If I happen to witness a tender moment between two people who love each other–be it family or partners–I’ll get choked up. The same thing happens to me when that Warner Brother’s logo zooms in among fog and John William’s Hedwig theme starts playing. Crying over things that deserve our appreciation is nothing new to me it would seem, so it should have come at no surprise to anyone that I began tearing up the moment our plane from JFK finally touched down in Rome. Or that when I first got to stand in the open air outside, a beautifully sunny 65+ degrees with the smell of Spring in the air, I wanted to hold my mother and cry tears of joy. And, of course, the moment our taxi driver took us through and under the first walls of Rome my eyes started brimming–because I knew I was back again.

Everything here is Art

Two years ago, I barely got to see Rome and it broke my heart ever since. I remedied a similar circumstance with Paris just this last year with my mother in tow and wanted to do the same this time around as well. My father overheard our plans to visit Rome, Florence, and Venice, however, and decided that he wanted to be apart of it as well–to see the things of the Roman Empire and to stand at the Colosseum where gladiators once stood. I’ve been versed in the history of Rome since I was a child thanks to my father’s general interest while growing up, so a part of me thought it only right that he should get to see these things with me too.

Our hotel in Rome is pretty darn swanky

First things first, after finding our way to our hotel courtesy of our lovely taxi driver Luca (my mother made sure to loudly proclaim how cute she thought he was. Don’t worry, we’re sending her to Francis on Friday to atone for her brazenness), we decided to check out a restaurant he recommended to us as having the best pasta in all of Rome–Brazilai Bistrot. Now, we were running on precisely two hours of sleep and had been awake for more than 24+ hours at this point so we were also determined to cram in as much as we could along the way to help stay awake. Before we got ourselves all full and fed, we took a quick stop to say hello to my old friend the Trevi Fountain. I tossed a coin in last time I was in Rome, so I wanted to make sure to let it know that I held up my end of the bargaining fortune.

Afterwards, we started the long walk to our food coma destination. Since our hotel is located in such a prime location here in Rome, I thought we should try to walk everywhere as much as we could. I’m an idiot though and I resented myself pretty quickly into the walk when I was reminded of how exhausted I was from traveling, but we trekked on somehow. Stumbling into the restaurant after a good half hour of shuffling our way around cobbled streets and trying not to pass out, we took a seat and were immediately recognized for the tourists we are! I was determined to practice the Italian I’ve been learning these past few months though and asked if I could try in Italian when our server spoke to us in English. We proceeded to have the rest of our ordering conversation in Italian, so I hope I made my favorite Roman and teacher Ileana proud! 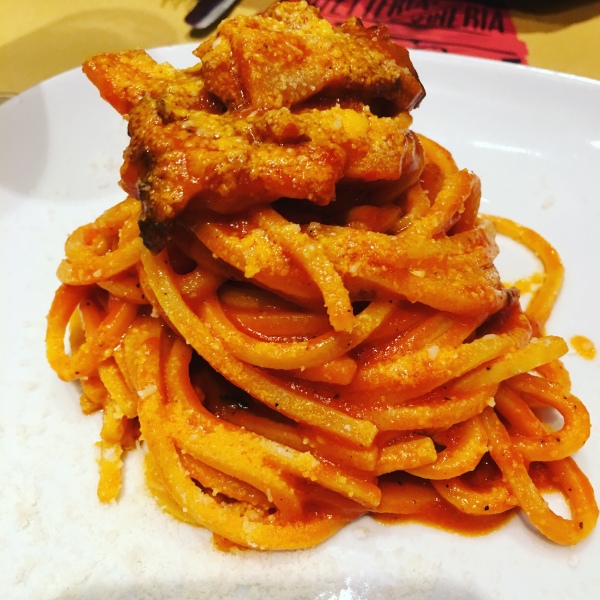 Good and wined, it was hard to miss the lure of the Colosseum poking out and waving at us from down the street after existing our restaurant, so we decided to go pay the Flavian Amphitheater a visit too. We learned from our family in Italy that this whole week is Cultural Week–which means every museum is free except The Vatican. We figured the Colosseum would be insanely busy, especially considering the timing when we decided to stroll up (2 hours before close? Nah maaaan). But even though we weren’t intending on going in for a tour today, we ended up running into a guide who was able to help us skip the line (which was disgustingly long and stuck at over capacity). We figured we had all that pasta to walk off anyway so we went along with his group and decided to do the Colosseum, despite how sleep deprived we were feeling.

I ended up not taking many pictures inside because it was so busy in there with people and I was too distracted listening to our tour guide, but a lot of it was under renovation anyway (which is awesome!). I’ll have to do a proper write-up of the Colosseum some day, but suffice it to say–I thought our guide did a fantastic job bad mouthing the inaccuracies of the movie Gladiator. And I wasn’t about to pick a fight with him when he said the Roman Empire collapsed with the sacking of Rome (though the Eastern half was just fine with Constantinople kicking, k thanks) All in all, it was a good nerdy time.

Lastly, I stuffed my face with pizza and more wine which helped a little bit but now I really need to sleep for like 10 hours so I’ll let you all know how tomorrow goes!

On the Agenda: Lots of Gelato!