Physical representation of my writing discipline.

Gather around the hearth, my friends. I have a story to tell!

There was once a proud blogger who panicked when she realized that she was about to reach 100 published posts. This was a crowning achievement, she thought, and so she wanted to do something special to celebrate this momentous occasion. Perhaps I should do an extensive essay on my blog’s tagline and prove it do-able —

Because even monkeys can write a paper on Misogyny, Aristotle, and Middle Age Europe.

I have a tendency to buckle under pressure, especially when it is self-imposed. I envisioned this research being something akin to an amateur thesis, the scope of it so grand! I was ramping up to it with my posts such as Illuminating the Dark Ages, and had another planned to cover the contentious Great Man Theory, and then to round out with a state of the Catholic Church in the Middle Ages before I hit you with my epic take.

But, alas, I have failed to do so. Not because I can’t write it–but because I can’t commit to doing it. I don’t feel like it. History for me is a muse and he takes me through various phases of interest and right now, I must admit, my headspace is about nearly 2,000 years in the past from where I need to be in order to successfully pull off this ‘golden post’. 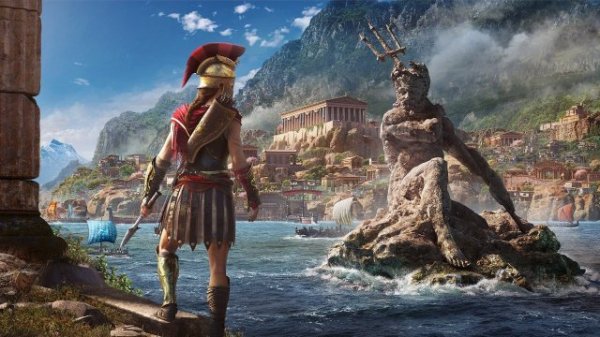 Assassin’s Creed: Odyssey came out and if you’ve been following my blog all these years (Thank you, thank you, THANK YOU!) you know already that I’m versed primarily in Classical Antiquity. So for a role-playing video game with an open world concept functioning like a sandbox where the developers researched every painstaking detail to fill their map with as close to accurate representations of historical locations as it is possible for any of us to know–I’m all over that in a heartbeat.

The consequence being, however, that this is pretty much all I feel like writing about right now. Which brings me to the problem with this ‘Golden 100 Post’. I haven’t updated my blog in the past month, despite an interest in doing so (just not on the purposed topic I had planned!) because I’m literally 2 posts away from hitting 100. Well, now 1 away with this one. With my proposed celebratory essay, this didn’t leave room for me to dabble and post about anything else! So, to allow myself the freedom to again write about anything in History that I find fascinating (or humorous) enough to share with you–I’m going to let myself off the hook on the celebration post. I’ll get to it when I’m good and ready! I can certainly still clap for myself on reaching 100 with or without the sweating over a research essay I’m not earning a letter grade for!

So in the meantime, you can expect some Ancient/Classical Greek inspired posts from me as I continue to gallivant around in a video game and am reminded of things I’ve always wanted to touch on our look into deeper for myself. And the good news is, I’ll get to introduce you to Aristotle a bit more too before I start retroactively blaming him for a bunch of bullshit.

Thanks for sticking around with my general assholery and lack of a coherent update schedule–I’m about to get a little Greeky with it.

One thought on “It’s All Greek to Me!”