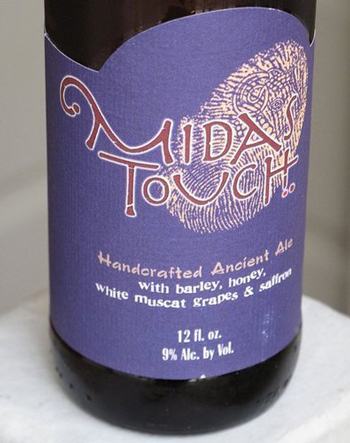 History being a life long passion of mine, I often inform people of this fact when dancing through the usual small-talk ‘get to know you’ questions. This is something that usually doesn’t inspire much interest and most of the responses I receive are something along the lines of, “Ah, that’s cool–always found it boring in school though.” History is more than just memorizing dates, I’d exclaim! It’s insanely dramatic and fun, filled with stories so crazy half the thrill of it is knowing it happened for real–and sometimes, it even uncovers ancient recipes for booze that can be reproduced for us modern day plebeians to try! How are you not entertained?!

Almost 50 years ago, Penn University excavated a tomb found at the ancient site of Gordion, Turkey. Gordion was famous for being where the impossibly legendary Gordian Knot was tied and prophesied to be undone only by someone destined to rule all of Asia. That someone turned out to be Alexander the Great because if there was ever a prophecy, it certainly applied to him most conveniently. Geez, Alexander, leave some table scraps for the rest of us! Gordion was also famous for being the seat of the kingdom of Phrygia which was home to a famous ruler you may have also heard tales of. That being King Midas of poorly chosen wishes. Though the tomb hasn’t been definitively proven to be that of Midas [1] (the other assumption is that it may instead belong to his father Gordius), Archaeologists are sure that the tomb certainly belonged to a beloved Phyrgian king from the Iron Age because they discovered the body of a 60-65 year old male adjourned in purple and surrounded by over 150+ bronze drinking vessels left over from a celebratory farewell feast held outside of his tomb.  The collection was whisked away and sent off to the Penn Museum for safe keeping and forgotten about until Dr. Patrick McGovern, basically the Indiana Jones of ancient alcohols & beverages became bored one day and decided to take a closer look at the contents. [2]

Using an array of micro-chemical analysis including, but not limited to, infrared spectrometry, gas and liquid chromatography, and mass spectrometry (I don’t know what any of this means but I wanted to include it so I could make any of the science nerds in the audience warm and fuzzy), he was able to isolate the marker compounds of specific natural products that were contained in these vessels by studying the sticky residue found in the remains. And what he found was shocking–besides the completely normal consumption of spicy, barbecued lamb and lentil stew, he found evidence to suggest that the drink of choice among these funeral revelries was a booze concoction hinting of grape wine, honey mead, and barley beer together. A mixture that made him blanch at the thought!

That doesn’t even sound good, right? Ever curious, however, Dr. Patrick McGovern issued a challenge to micro-brewers while speaking at a convention, and invited any one of them to join him in the labs the next morning to see if they could reverse engineer the drink found in Midas’ tomb. At least 20 micro-brewers took him up on the offer, but only one came out the victor–Sam Calagione of Dogfish Head Brewery. Together, they created Midas Touch–a craft brew you can actually purchase and drink today! It’s completely based off of the components found in the drinking vessels making it the oldest ancient ale recipe. It’s made with white muscat grapes, honey, and barley–actually a pretty delicious combination having tried it. It falls more on the line of mead in my opinion. It also contains the addition of saffron–it’s a bit of conjecture, but since the bittering agent hops wasn’t introduced to Europe until around 700 AD, they went with this extremely valuable spice which was found prominently in Turkey during antiquity and which is possible to have been the component responsible for the yellowish color found in the residue in the drinking vessel remains. The beer isn’t the cheapest in the world, thanks to the saffron, but it’s an insanely yummy drink and I personally love it not being much of a beer drinker myself. Makes for a fun immersive history experience too, now you have a taste for what ancient peoples drank! [3]

Now, if you’re a bit hazy on the details of Midas and why you remember his name, I got you–there are a few mythological traditions that his story comes from thanks in part to Aristotle and the diligent re-tellings of Ovid in his Metamorphoses XI.

There are a few variations, but one of the more well known ones has Dionysus, the god of wine and other wild pleasures making him the favorite of Dude-Bros everywhere, hanging out with his gang of satyrs and the like. One of the satyrs, Silenos, gets super drunk and finds himself kidnapped by a bunch of filthy peasants and brought to King Midas. One variation has Midas actually lacing a drinking fountain with wine because apparently Silenos, when drunk, spouts all kinds of useful wisdom and quips and lashed out a positively delightful one upon being abducted to court:

The best thing for man is not to be born at all, and the second best thing is to die as soon as possible. [4]

Yikes. Either way, King Midas recognizes Silenos and pays extra attention to his comforts, lavishing him with entertainments for 10 days before returning him to Dionysus who is surprised and exceedingly grateful. Dionysus tells Midas that he’ll grant him one wish in thanks for not raping or murdering the hell out of Silenos which most ancient men are want to do in these days and Midas takes next to no time in deliberating on what his true desires are. Clearly lacking in the gift of hindsight, which he should have wished for instead if you ask me, he requested that everything he touched be turned instantly to gold.

Wish granted, Midas was pleased to see that he could turn all matter into glittering gold, most likely singing the line from Smash Mouth’s All Star as he did so. He was delighted when twigs and leaves shifted to aurum with the slightest touch and skipped on back to his court excited for a future filled with endless wealth. He began to regret his wish pretty quick, however, when he realized his new golden touch also applied to anything he tried to drink or eat–apparently not being a dickish enough king to demand being hand-fed to by his servants. He soon became so inconsolably hungry and thirsty, that he went crying back to Dionysus asking for the wish to be taken back. Dionysus told him to stop being such a whiny baby and go wash off the wish in the river Paktolos which could be found near Sardis. Doing as he was told, Midas washed away his golden touch in the river which is said to be why the sands of the river are forever golden. [4]

That’s the most famous story of King Midas but there were others. Another one has Midas’s bad judgment continuing when he foolishly insists Pan to be a better musician than Apollo, which results in the god furiously cursing him with donkey ears for being such an ass. Then there is the supposed bastard son of Midas, Lityerses, who is some kind of proto-Dexter serial killer who tricks travelers into competing against him in an unwinnable contest and then ceremoniously whipping, beheading them, and then stuffing up his victims into a corn stack while singing a playful tune (probably also All Star by Smash Mouth). Herakles came across him and was like nah brah and gave him a piece of his own medicine. [4] 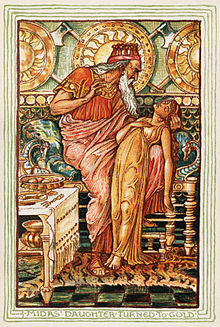 In a much later version, Midas’ daughter becomes the victim of his golden touch.

But whether or not you believe in Greek Mythology being in any way factual (no judgments from me), there really was a King Midas of Phrygia which is why Archaeologists assume he could be the occupant of the tomb they found and the owner of the vast amount of residue-y drinking vessels. The Midas most likely featuring in these tales reigned around the 8th century BC during the time of Sargon II. He showed up a few times in correspondences and was known as an aggressive and powerful ruler who allied himself with Hittite kings (basically Troy, ya’ll) against the Assyrians. He also cooperated in coordinated military campaigns with the Greeks, which might explain why they adored him enough to feature him in stories (whether or not they were much for flattery). Sources also suggest that he had dedicated his throne to Apollo in Delphi (perhaps as an apology in hopes of getting his old human ears back, no?) and that he had married a Greek princess and daughter of King Agememnon of Kyme (Not that Agememnon). Her name was Hermodike II and she’s credited with inventing Greek coinage which might explain the whole gold thing, who knows. [5]

Oh and also, this was secretly a Kingslayers post all along (Hah! Got you!) According to sources, which include Herodotus, this King Midas committed suicide by drinking bull’s blood. [5]

Because why in the gods names would you do such a thing.

Cause of Death: Drinking the blood of bovines when he should have been drinking Dogfish Craft Beer, clearly.