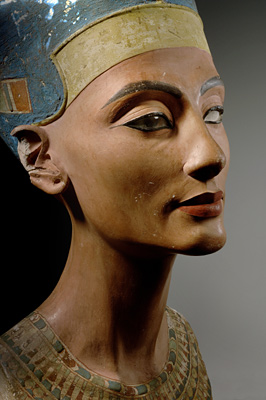 The Bust of Nefertiti,  made from stucco and limestone, currently residing in the Neues Museum in Berlin, Germany.

Nefertiti is, arguably, one of the most famous Egyptian queens–right along side Cleopatra, and with growing renown, Hatshepsut. But the reason for the world’s attention has everything to do with the bust above and less to do with what we actually know about her, which isn’t a whole lot. The bust in question was discovered in 1912 by a German archaeologist in the ancient capital of el-Amarna (then Akhetaten) in a sculptor’s workshop named Thutmose. Since then, the world has been enraptured by her beauty and her image has become synonymous with Ancient Egypt. But who was Nefertiti? That’s still a matter of debate.

What we do know for sure is that she was the reigning queen and Great Royal Wife alongside her husband Akhenaten. Being the principal wife meant that you were a step above the rest of the wives and concubines that typically made up the harem of an Egyptian Pharaoh. In Nefertiti’s case, she might have been a step even above that. What’s notable about the rule of Akhenaten, is that a few years into his reign, he decided to revolutionize the Egyptian cult of worship by proclaiming that Aten, a sun god, was the single monotheistic religion. This, understandably, didn’t go over too well with the Egyptians since they had an entire pantheon of gods and most cities had their own patron deity. But while the whole one-true-god experiment went on, it seemed Akhenaten shook up a bit of the social hierarchy too. When it came to his chief consort Nefertiti, archaeologists were a bit surprised to find her depicted in parallel with her husband suggesting they were both co-regents. Typically, a queen was shown behind the pharaoh or at least smaller in scale, but in this case there were many examples of Nefertiti sitting alongside her husband, walking next to him in processions, officiating at ceremonies, and even sometimes wearing a distinctive crown signifying she might have been a bit more badass boss lady under this new era of Aten. [1]

Not gonna lie, had a crush on this kid when I was 8-years old

In fact, it’s this seeming display of power that have lead archaeologists and historians to wonder if perhaps she even became pharaoh for a period of time. After the death of Akhenaten, another extremely famous ruler took his place–our favorite clubfooted teenage boy king, Tutankhamen. But while he would have been too young to immediately rule at the time, it seems there might have been a separate ruler entirely in the interim, which some have suspected to be Nefertiti herself. Unfortunately, it’s hard to tell. And herein lies the problem with attempting to subvert an entire religious order in the matter of one lifetime. Tutankhamen immediately reversed his father’s monotheism and restored the old Gods when he became pharaoh but even that wasn’t enough to  ward off the animosity towards his family. After Tut’s untimely death at such a young age, his grandfather’s old vizier Ay came to power, shortly followed by a general named Horemheb who was determined to erase as much of the family from history as he could. That’s partially why the discovery of King Tutankhamen’s tomb was such an amazing find at the time–due to it’s unorthodox location given Tut’s early death (some believe the tomb was intended for Ay in the first place) and the resulting erasure from history that followed, it’s entirely possible that his tomb remained untouched and un-defiled for so long because people had simply forgotten he existed.

Piecing together a timeline and a story of a family who had almost been struck from history forever is no easy task. And there are a lot of theories and unanswered questions about Nefertiti, some that may never be resolved. Who were her parents? Possibly the adviser Ay or maybe she was a sister of Akhenaten. Was she King Tutankhamen’s mother or would that have been a lesser wife Kiya? If she was King Tut’s mother, perhaps we’ve already found her and is the mummy known as The Younger Lady. [2] Or, maybe she’s still out there in the sands somewhere, waiting for us to find her. You’ve probably seen her recently in the headlines, Nicholas Reeve’s having theorized a hidden chamber within King Tut’s tomb having belonged to Nefertiti (Spoiler: It wasn’t), or Expedition Unknown’s facial reconstruction on The Younger Lady trying to figure out if the mummy is possibly the queen, it’s clear that Nefertiti is still certainly in the forefront of our attention. 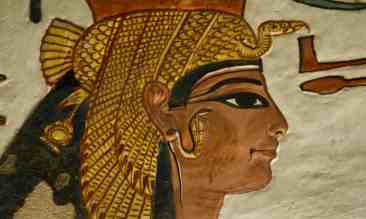 Queen Nefertari under the Ramasside Dynasty

As for Nefertari, a quick google image search will get you a whole bunch of images of the Bust of Nefertiti above, siiiigh. Nefertari perhaps doesn’t have a world famous bust hanging around in a museum, but she too was known for her beauty back in the day. And she must have been some looker to be Ramesses II’s most beloved wife out of his extensive harem that bore him somewhere around 100 children. [4] Ramesses II loved her so much, he even constructed a temple for her at Abu Simbel which you’re probably familiar with… 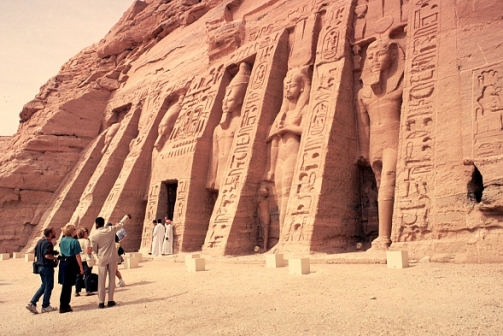 Hey baby, I heard you like monuments so I put a monument in a monument

Ramesses II was so smitten with his queen his dedication text reads like something a teenage boy would scribble into song lyrics in a flex notebook.

A temple of great and mighty monuments, for the Great Royal Wife Nefertari Meryetmut, for whose sake the sun does shine, given life and beloved. [4]

Oh, and though it would take me an entirely separate post to detail why Ramesses II is known as ‘The Great’, I’m sure you’ve all already heard of him. He’s the pharaoh commonly associated with the biblical story of Moses in popular culture re-tellings. There isn’t any verifiable evidence to suggest he was the pharaoh mentioned in The Bible, but that hasn’t stopped Hollywood from portraying him and his wife Nefertari whenever they’ve gotten the green light. So, perhaps Nefertari’s face isn’t featured in archaeology magazines every now and again, but she’s been immortalized on the silver screen and has become famous in her own right as a result. Take your pick!

So, a quick little guide to tell the difference between the two…

Nefertiti is the queen with the famous bust resembling Angelina Jolie.

Nefertari is the queen in that crappy Ridley Scott Exodus movie.

Who knows where the hell Nefertiti is or even who really mothered King Tutankhamen.

Nefertiti maybe probably kinda who knows got to play as Pharaoh before she died.

Nefertari got temples and the most lavish tomb known to queens.

One thought on “Nefertiti versus Nefertari”