When I was 8-years old and most girls were decorating their bedroom walls with posters of Leonardo DiCaprio, I was busy ogling thick textbooks filled with images of sinewy, mostly-shirtless pharaohs. This childhood interest of mine was not at all helped by the release of the Dreamworks animated film The Prince of Egypt that same year which was similarly filled with plenty of cartoon biceps. And as a little girl, it made sense to me that I should aspire to be Evelyn O’Connell in The Mummy (1999) and nab myself a sort of walking Curse Bae with regenerating abs who wants to make-out a little and maybe sacrifice you in some kind of ancient ritual or whatever. I’m not sure why Evie didn’t go for that, personally.

Deliver us from your thirst trap, Ramses

So when I learned in school about the existence of an Egyptian pharaoh that was my age, I totally thought I had some kind of chance here–despite the fact he’d been dead for 3,000 years or so. But what’s a minor inconvenience in love, right? King Tut was my boy king! Unfortunately, my Catholic school girl self was in for a rude awakening on just how hot this dream barge probably was. Hold on to your chariots, folks!

Tutankhamun, or my first history crush if you want to get technical, was a 14th century BC pharaoh of the New Kingdom in Egypt. He took the throne at the age of 8 or 9 years old after the death of his heresy-loving father Akhenaten who was famous for being that one crazy pharaoh who insisted that Egypt only worshiped one god instead of the slew of cults they already had going for them. There’s a lot of confusion about who exactly came to power after Akhenaten passed, but it’s assumed Smenkhare (we have no idea who this was lol) and then Neferneferuaten (definitely maybe probably Akhenaten’s wife Queen Nefertiti?) were short-lived pharaohs before King Tut took to power but dammit–it’s all really messed up and hard to figure out when angry dudes try to erase entire royal lines from history but I’m getting ahead of myself here. [1] 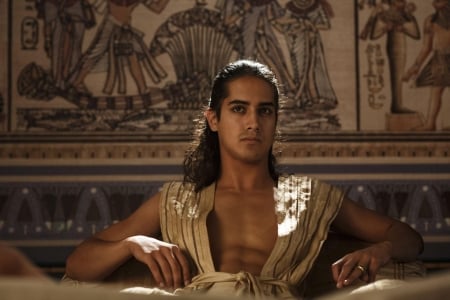 Can we just pretend this is exactly what King Tut would have looked like? (Avan Jogia in Tut (2015)

What my younger self wasn’t aware of was that Tutankhamun would have been the product of years of incest–a topic, thankfully, left out to dry in the desert in elementary school. That makes this an unofficial History is Incessantly Incesty III post, baby! We know for sure that his father was Akhenaten but it’s unclear specifically who his mother is aside from her also being his father’s sister thanks to DNA testing. There’s a lot of arguments here, and I’m not about to wade into much of it, but generally it is agreed that Tutankhamun shares DNA with a mummy discovered in the Valley of the Kings known as ‘The Younger Lady’ and that this mummy is also a full-sister of Akhenaten. There are some speculations that this mummy may have been Queen Nefertiti, but it’s generally believed that her remains are still out there somewhere undiscovered–so it’s unlikely that she would be the mother of Tutankhamun despite being Akhenaten’s principle wife. Pharaohs and their harems! [1]

Thanks to the drunken koolaid of incesty genetics, my would-be-boyfriend came out half-baked and not in the good way. Ahem, let’s list off all of the discovered ailments and deformities upon examination of his mummy and crush the once lofty dreams of an 8-year old me, yeah?

Unrolling the papyrus…King Tut suffered from the following:

– A clubbed left foot (Dude had a bunch of canes in his tomb!)

-And also just a shit ton of malaria.

Even without all of this going on, he also married his half-sister Ankhesenamun so he was probably bad news bears the whole time anyway. And since I wasn’t related, what chance did I really have with an Egyptian pharaoh if we’re being honest?

Thanks to King Tut’s lifetime of generally poor health, his reign as pharaoh didn’t end up lasting too long. He died 10 years into his run under mysterious (to us) circumstances. The reasons for his death at such a young age aren’t available to us in written record, but it’s become something of a thousands year old mystery and cold case that even writers like James Patterson have taken a whack at. Because of the suspicious ascent of his Grand Vizier Ay to the seat of pharaoh immediately afterwards and then passed on to general Horemheb who attempted to erase King Tut’s family (and Ay) from history, all theories pointed to a murder cover-up. Before being debunked, there was a lot of weight put on a theory that King Tut had been killed by a blow to the head because of some found bone fragments in his skull. However, it’s now widely accepted that the compounding disorders he already suffered from along with a recent leg fracture and infections of malaria are what likely did him in. [3]

May your spirit live, may you spend millions of years, you who love Thebes, sitting with your face to the north wind, your eyes beholding happiness. – Quote found on the Wishing Cup of Tutankhamun, an artifact found in his tomb.

Because of his early death, our poor feeble Tut wasn’t able to accomplish much aside from overturning his father’s monotheistic legacy and attempting to rebuild and strengthen the ruined monuments and economy left in his family’s wake. With little on his resume, why is it that he is one of the most recognizable Egyptian pharaohs today along with greats like Ramesses II?

What makes Tutankhamun unusual compared to his peers, is the absolute whirlwind sensation the discovery of his completely intact and undisturbed tomb in the 1920’s was. Because he likely died sooner than expected, and because there probably was something shady going on, Tut was buried in a tomb that was meant for his successor Ay who went on to take Tutankhamun’s royal tomb. Tut’s final resting place ended up being a much more modest tomb and had only been robbed twice, presumably soon after burial because there is evidence of the tomb being repaired. Tomb robbing was rampant in antiquity, aided by the fact that everyone knew piles of wealth and artifacts were being walled up inside with a corpse meant for the afterlife, so by the time tombs were discovered in modern day–most of it was already picked over. In Tut’s case, because of his peewee tomb and Horemheb’s attempt to remove all memory of the dynasty having ever happened in the first place, his tomb was lost to the sands of time and forgotten about until Howard Carter came along. [4]

Despite Horemheb’s best efforts, early excavations of the Valley of the Kings by archaeologists turned up small mentions of a little pharaoh known as Tutankhamun in other tombs. Under the patronage of Lord Carnarvon, Howard Carter spent years digging around the Valley of the Kings until one day, his water boy fell over a stone that ended up being the top of a hidden stairway. Once Carter and his team dug it up, they found a doorway with a cartouche and the world would never be the same again. Howard Carter, along with Lord Carnarvon and his daughter Evelyn, entered the tomb for the first time in November 1922–and it was another few months of excavating and cataloging until the team reached Tutankhamun’s sarcophagus. All of these events were widely covered in the international press, the whole world watching in amazement at the discovery of a tomb filled with nearly 5,500 treasures including Tutankhamun’s golden mask–the quintessential image of Ancient Egypt (pictured above).

The discovery was also made famous by the persistent rumor of a curse that was said to have resulted in the early deaths of many who had entered King Tut’s tomb. Lord Carnarvon died five months afterwards from either pneumonia or blood poisoning, which fueled speculation from Sir Arthur Conan Doyle and many newspapers that a ‘Mummy’s Curse’ was to blame. This appears coincidental, as only 8 out of the 58 people who would have been effected died within a decade or so. Howard Carter died more than 10 years after the event and Carnarvon’s daughter Evelyn lived all the way to the 1980’s. [4]

Regardless, thanks to the trove of treasures and the well-preserved mummy and tomb, King Tut is now probably the most famous Egyptian pharaoh in history. His treasures have been exhibited all over the world to much acclaim and can currently be found in London before being permanently moved to the new Grand Egyptian Museum in Cairo. And though he’s perhaps not as physically appealing as my 8-year old self had always imagined, King Tut did give us the gift of well-preserved Egyptian History for us to study for decades. I just can’t say I’m interested any longer in studying his face.

So the lesson here is, make sure you’ve waited until the CT Scan results are in before declaring undying devotion to a history crush, ya dig?