END_OF_DOCUMENT_TOKEN_TO_BE_REPLACED

Like the Irish before them, Italians became scapegoats for economic difficulties as jobs became fiercely contested. Pseudoscientific theories derided them as inferior to Northern and Western Europeans because of their “Mediterranean” blood, and Nativist elements blamed them for everything from domestic radicalism to organized crime. Italians living and working in towns and cities across the United States were subject to physical attacks by anti-immigrant mobs or organized groups such as the Ku Klux Klan.
– Library of Congress, Immigration: Challenges for New Americans p. 2 [1]

Both of my great grandfathers arrived from Italy in the early 1900’s to start a new life in America. They were, nonetheless, worlds apart . Like most of the 4 million migrants of Italy during the Italian diaspora which began amidst the Italian Unification [2], my great grandfathers fled the economic decay of southern farmlands and the corruption of rampant organized crime. But, most importantly, they were seeking a new and better life chasing the “American Dream.” They both took different paths to achieve this.

The American dream, that has lured tens of millions of all nations to our shores in the past century has not been a dream of merely material plenty, though that has doubtlessly counted heavily. It has been much more than that. It has been a dream of being able to grow to fullest development as man and woman, unhampered by the barriers which had slowly been erected in the older civilizations, unrepressed by social orders which had developed for the benefit of classes rather than for the simple human being of any and every class.
– James Truslow Adams, Epics of America, 1931. [3]

Historically, Italian immigrants had not always been welcome. They too, were distrustful and wary of government institutions, having themselves seen their land invaded by conquerors both foreign and criminal. Isolating themselves made assimilation into American culture difficult as Italians banded together to protect themselves, trusting no one but family. [4] Some of them didn’t speak a lick of English and many never became citizens.

The downside was that Italians often chose to wait to become naturalized citizens, delaying their full inclusion in America’s political and civic life. One finds many Italians becoming naturalized in the years 1939 to 1941 as war erupted in Europe. The Second World War would find the United States in conflict with Italy, as non-naturalized Italian immigrants would find themselves briefly branded “enemy aliens.”
– Vincent J. Cannato, 2015, Humanities: The Magazine of the National Endowment for the Humanities, What Set Italian Americans Off From Other Immigrants? Vol. 36. [5]

Like my great grandfathers, some Italians arrived without formal education or having dropped out of school as pre-teens. They competed for low-wage earning jobs and housing, which threatened Americans who saw them as economic thieves. And they were Catholic, a religion at the time which was lambasted and hated by a largely Protestant citizenship. [6] Italians were targeted by the Ku Klux Klan [7], prejudiced police investigations and mistrials [8], and one of the largest mass lynchings in New Orleans’ history [9]. During World War II, Italians were also subject to internment camps and labeled as “enemy aliens” [10] while some, like my grandfather James, joined the army and fought for America.

Vincenzo arrived at Elise Island alone in 1910 when he was only 19 years old. He didn’t speak English, he didn’t have any money, and all he had with him was two potatoes in his shoes and a grape stem in his sock. He ended up obtaining a job in the iron mines in northern Minnesota where he worked hard enough to send for his wife back in Italy. They had many children and owned a family farm and butchery, many of them still residing up north in Minnesota today. Christano was 23 when he arrived in 1913, but unlike Vincenzo, lived a life of crime and became embroiled with Chicago mobsters during the height of bootlegging during the Prohibition Era. He settled down just long enough to have my grandmother but was frequently missing in all other family aspects. Last he was heard of, he had been wanted for murder in Las Vegas, Nevada in the 1950’s. Both men embodied two different realities and stereotypes of Italian-American immigrants. Vincenzo was the hardworker who pulled himself up by his bootstraps to earn a respectable living and was absolutely proud to be a citizen of this country. Christano lived a life of lawlessness, worked professionally with hitmen, abandoned his family, and defended criminal institutions in power.

Without them both, I would not be here today. 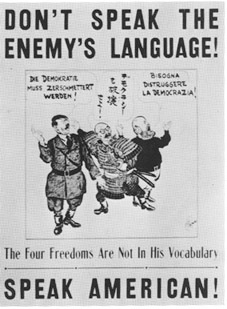 In 1924, barely a decade after Vincenzo and Christano migrated, Congress passed The Immigration Act which meant to curb the number of immigrants allowed entry into the United States by enacting a quota that ensured that only 2% of a total number of people of each nationality were allowed entry. This act also excluded Asian immigrants, regardless of quota, with an ‘Asiatic Barred Zone’. Chinese immigrants were already excluded at this time with the Chinese Exclusion Act of 1882 which barred entry. President Calvin Coolidge had said of its passing, “Biological laws tell us that certain divergent people will not mix or blend.” [4]

Had my great grandfathers not been lucky enough to immigrate a decade prior, one or both may not have been able to gain entry to the United States at all.

The Immigration Act was not overturned until 1965 with the passing of the Immigration and Nationality Act. This new act changed the way quotas were counted, giving preferential treatment to those with U.S. citizens or resident family members by eliminating restrictions. It also abolished the counting of national origin as a basis for limiting specific immigrants.

It’s important to remember where you came from. I am a descendant of immigrants, some honorable and some less so. Because of anti-immigration legislation, fear, and racism towards Italians and others, I may not have even been born at all. Perhaps if fear of the foreign others or those evading war-torn and politically deviant ideology had been successful in barring entry to the United States, I would also be without my great love and boyfriend. If a certain family of refugees had been rejected entry, I would have never met my lifelong childhood friend of 20 years. If another family had not been granted access to the United States, and who now must face legislation prohibiting them from seeing their family and loved ones, I wouldn’t have met another close friend and loved one.

I may no longer be facing the discrimination of my ancestors, but I am still effected by it today. I see my loved ones fearing the same dangers my family faced back when they were not considered “decent” enough to be Americans and I will not stand by and be complacent of it. I will never turn my back on their struggles or ignore those of my family because I myself may be considered safe.

We are all of America and they are all part of my famiglia.

Fact check it, yo!
[1] Library of Congress, Immigration: Challenges for New Americans. PDF retrieved here: http://www.loc.gov/teachers/classroommaterials/primarysourcesets/immigration/pdf/teacher_guide.pdf
[2] US Citizenship, Italian American History and Culture. Retrieved here: https://www.uscitizenship.info/italian-american-history-and-culture/
[3] Adams, J. The Epic of America (1939). Retrieved from: https://books.google.com/books?id=paIpt-vBVR8C&printsec=frontcover&dq=james+truslow+adams+the+epic+of+america&hl=en&sa=X&ved=0ahUKEwjavPux0-XRAhWm0YMKHYNUAXYQ6AEIHDAA#v=onepage&q&f=false
[4] Laurino, M. The Italian Americans: A History. (2014) Retrieved from: https://books.google.com/books?id=pIOiAwAAQBAJ&printsec=frontcover&dq=the+italian+americans:+a+history&hl=en&sa=X&ved=0ahUKEwiKxr7X1eXRAhWlyoMKHXgPDOgQ6AEIHzAA#v=onepage&q=the%20italian%20americans%3A%20a%20history&f=false
[5] Cannato, V., Humanities: The Magazine of the National Endowment for the Humanities, What Set Italian Americans Off From Other Immigrants? Vol. 36. (2015) Retrieved from: https://www.neh.gov/humanities/2015/januaryfebruary/feature/what-sets-italian-americans-other-immigrants
[6] Mark S., Massa S., American History Oxford Research Encyclopedia, Anti-Catholicism in the United States. (2016) Retrieved from: http://americanhistory.oxfordre.com/view/10.1093/acrefore/9780199329175.001.0001/acrefore-9780199329175-e-316
[7] Library of Congress, Italian Immigration: Under Attack. Retrieved from: https://www.loc.gov/teachers/classroommaterials/presentationsandactivities/presentations/immigration/italian8.html
[8] Frankfurter, F. The Atlantic, The Case of Sacco and Vanzetti. Retrieved from: http://www.theatlantic.com/magazine/archive/1927/03/the-case-of-sacco-and-vanzetti/306625/
[9] Falco, E. CNN, When Immigrants Were the ‘Other’. (2012) Retrieved from: http://www.cnn.com/2012/07/10/opinion/falco-italian-immigrants/
[10] Branca-Santos, P. Pace International Law Review, Injustice Ignored, The Internment of Italian-Americans during World War II. (2001) Retrieved from: http://digitalcommons.pace.edu/cgi/viewcontent.cgi?article=1207&context=pilr