Cossetta’s Market as it stood in 1952. (Photo: Minnesota Historical Society)

In the late 19th century, around 10,000 Italian immigrants made their way to Minnesota–a vast majority of them settling around the Twin Cities, Duluth, and the Iron Range. My great-grandfather was one of them, opting to work in the mines up north. Most of them settled in St. Paul, however, and clustered near the Upper Levee/Landing or “Little Italy” where many of them worked on the railroad (In the 50’s, the Mississippi River flooded this area over and the neighborhood, unfortunately, was forced to relocate). As a result, St. Paul began to see a number of Italian run stores and restaurants pop up and among them was Cossetta’s in 1911. Michael Cossetta came from Calabria, Italy–a region where my family also hails from and can be found on the toe of the Italian boot–and established his deli on the Upper Levee. The market passed through family hands until current owner Dave Cossetta took it over in 1978, at the time only 21-years old and a meat cutter by trade. [4]

It was under Dave that Cossetta’s began to expand into the block of Italian fare it is today. He moved the market to it’s current location–situated down the street from Xcel Energy Center and within walking distance of the Minnesota History Center, Cathedral of Saint Paul, and the Science Museum of Minnesota (Here’s looking at you, Stranger Things fans!) and started branching out into selling meats, deli, and imported Italian groceries. In the grocery, you can find entire aisles dedicated to Italian olive oils, chocolates & candy, noodles, sauces, coffee, etc. And though slightly overpriced, it makes for the ideal stop to get a quick fix of whatever goodie you fell in love with overseas. The meats & deli alone are also worth a gander–it’s the best place to find a variety of spicy capicola (my family’s favorite), the best porchetta & prosciutto in town, and fresh hand-rolled ricotta cheese for those of us who still make their lasagnas homemade.

And the bread, THE BREAD!

Dave then expanded Cossetta’s into a Marketplace & Eatery–it’s here you can find a full quick-service dining experience where you can stuff your face with a slice of pizza, some of the heavenly Mostaccioli con Ricotta–a Cossetta’s staple–or simply run away with a to-go box of tiramisu before all of the delicious carbs slay you.

Or, if you’re looking for a more intimate, fine dining experience–Louis Ristorante & Bar was opened upstairs in 2012 with an eye for both more upscale, traditional mainland Italian dishes as well as some Italian-American staples like Mama Frieda’s meatballs! I’ve eaten at Louis a few times and lemme just…

But perhaps the best thing about Cossetta’s is the newly added pastry shop which was designed to reassemble a pasticceria in Italy–it was actually made there, disassembled, and shipped to the US where it was rebuilt for Cossetta’s by Italian craftsmen. [5] Having been to a few of the real deals myself, it certainly does feel like I’m back in Rome. 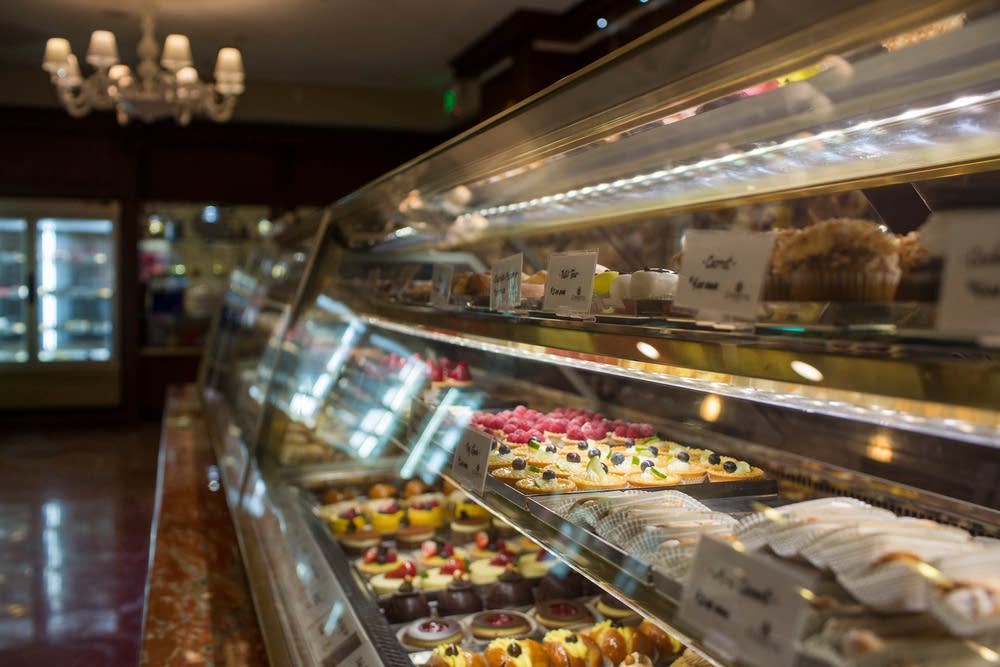 Not pictured: Drool. Photo from MPR

Leave the diet, take the cannolis! Cakes, tarts, gelati–it’s sweets heaven courtesy of Cossetta’s here. The tables are even packed in and tight just like a real pastry shop in Italy would be–so get over your claustrophobia and get the Italian experience the way it was meant to be, elbows touching and cream puffs oozing. And, naturally, I’ve indulged in my fair share of Lavazza espresso (You’ll find this brand everywhere in Italy!) and gelato here.

Since Dave took over ownership of Cossetta’s, he’s transformed it into a pillar of both Italian-American and traditional Italian cuisine. The blend of both Italian heritages married together like a sweet marinara sauce. Cossetta’s is one of the original Italian restaurants here in Minnesota, so its foundation of Italian-American historical significance had never been in question. But as the years have gone by and with remodels, expansions, and continued redesigns–Cossetta’s is now one of the best stops to get a little taste of the real Italy across the sea too. I’ve gone here to shop for groceries and pick up spicy capicola, tomatoes, and peasant bread to make sandwiches just like my Italian-American grandfather would eat on the farm up north. I’ve been here for coffee and dessert, or for a Christmas party with all of my aunts and cousins where we sat upstairs digging into chicken parmigiana. I’ve gone on dates with my boyfriend to Louis, had met my Italian language class there at the end of semester, and sometimes I’ve simply been in that area of St. Paul walking along the sidewalk–taking the time to smile and marvel at the collection of Italian antiques and decorations in the window.

To me, Cossetta’s is the beating heart of being an Italian-American here in Minnesota.

Footnotes, citations, and other reading: