Warning in advance, it’s about to get all morbid up in here! I’ve been reading The Wars of the Roses: The Fall of the Plantagenets and the Rise of the Tudors by Dan Jones, a narrative romp in British History imploding into a shower of blood and political upheaval only to settle into a charred semblance of stability that George R.R. Martin saw and was like, you know, this would be a fun inspiration for a thing where I slaughter all of my characters for sheer entertainment.

One thing that struck me more than how often power changed hands like the casting of the doctor in Doctor Who was how frequently someone wound up Hanged, Drawn, and Quartered throughout this mess. Leading me to ask, DEAR GOD WHY? When I was young, this phrase came up often when associated with Ye Olde Medieval Times (“Ye Olde” is nonsense by the way, we here at Histastrophe use it ironically because we’re shallow and pedantic like that, ya dig?) and I never quite knew what it meant. The “hanged” part is pretty transparent, so I went on my merry little life assuming it was just a spiffy alternative take on the usual ritual execution on the scaffold. It wasn’t until I was old enough to watch R-rated Mel Gibson films did the horrific reality become a bit more clear.

So, you’ve made it this far. You’re morbidly curious too! I like that. So let’s get right into it (like your abdominal cavity full of intestines, amirite? Right? Yeah, I just did a disembowelment joke, I don’t feel so good…)

What does it mean to be Hanged, Drawn, and Quartered? Well, it’s probably of note that even historians squabble over the context in the phrase alone because even they get a little bit bored sometimes evaluating dissertations. The accepted practice is as follows, however: Tie up the treasonous cur off horseback, hurdle, etc. and drag him through the streets where the crowd can scream, claw, and otherwise pelt with anything in arms reach. Then, the traitor is strung up on the scaffold and hung to within an inch of his life, cut down, violently separated from his Family Jewels, gutted and disemboweled with the intestines being thrown into a fire (Uh, traitor is still like…mostly alive and presumably conscious at this point), then he’s beheaded, and thus cut into four chunks–and maybe even put on display afterwards on London Bridge as a friendly, inviting “Welcome to England!” sign post. [1] Historians aren’t sure which part of this terrible process the ‘Drawn‘ part is associated with, since there are two clear options of which to apply here–drawn as in like through the street or drawn as in like a hungry zombie in The Walking Dead just going IN? I just have to say, guys, can we just talk about why the hell this was even a thing in the first place?! [2]

Now, it has to be said, like the American Revolutionary War, The Opium Wars, and salad cream–you can blame the British for this one! It seems like most civilizations had their favorite means of execution that they are now famous for–the French had the guillotine, the Romans had crucifixion, and the Persians had this batshit insane boat-murder thing where they put the victim in a hollowed out boat, covered in milk and honey, and set to float on a pond to fester and serve as a meal for various insects until death. So, I guess, we can let them have this one. To be Hanged, Drawn, and Quartered was the exclusive punishment of High Treason in England from about the 13th century AD c. to the 18th century AD. And that’s probably all thanks to Dafydd ap Gruffudd, Prince of Wales, who was foolish enough to piss of King Edward I of England. 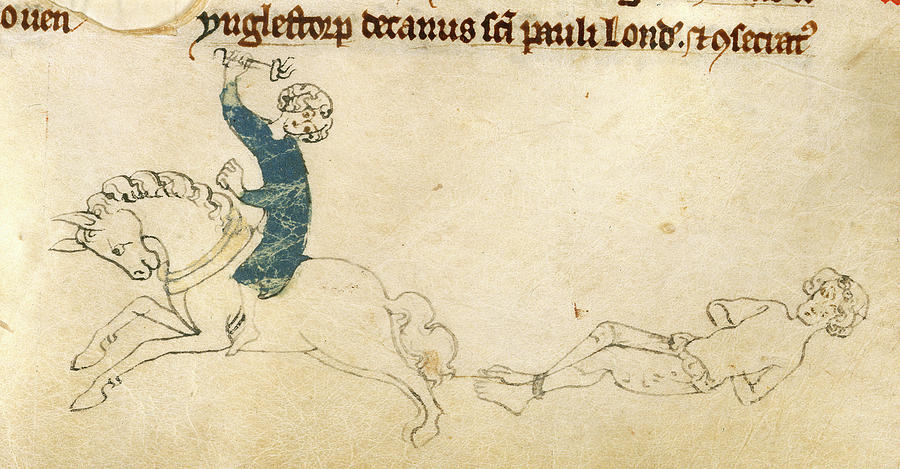 Edward I was a ruthless, pragmatic asshole who was mighty fine at doing his job. He was also one that should never have been crossed. Dafydd ap Gruffudd had joined forces with Edward I against his older brother Llyweln, clearly suffering from little brother syndrome and a delirious grab for power that pitted him against his own Welshmen. After doing Edward’s bidding and being gifted territory, Dafydd was somehow shocked to find that Edward’s plans for Wales didn’t stop there. Essentially, Dafydd invited the vampire into the house of Wales and started whining when it began sucking everyone’s blood dry. Finally, Dafydd realized his mistake and attacked the King he had previously sworn allegiance to (and taken a sweet English wife from, holla!) Edward I was obviously not pleased and so a proportionate punishment had to be devised.

In the various trials for treason Edward was involved at a personal level, for he considered each traitor as his own private enemy. The temptation therefore to act in a despotic way against those for example who denied him what he believed was his rightful possession of Scotland was very great. [1]

And Dafydd wasn’t the only one to suffer this fate. William Wallace, of Braveheart fame, was also executed in this fashion by Edward I. Prior to his reign, there wasn’t a clearly defined definition of high treason on the law books and as those of noble blood began to revolt enmasse, it seemed appropriate for the crown to begin setting some extreme examples. By the time Edward III came to power, high treason and the punishment of being Hang, Drawn, & Quartered became official with The Treason Act of 1351. And, in one of the few surprising moments in history when women got the better end of the stick, they were spared the fate entirely and were instead subject to burning. [3]

Other legendary figures (Or, well, traitors) in history met this unfortunate end through the years, from Hugh Despenser to Guy Fawkes.

So, when you’re touring London Bridge with your dear old Gran and taking pictures–don’t worry about the traitor’s heads on pikes thing. That old bridge is in various pieces all over London. I suppose we can all be a bit grateful that bloody remnant of brutal executions finally fell down.

[3] Sir Frederick Pollock & Frederic William Maitland, The History of English Law before the Time of Edward I, vol. 2 [1898]