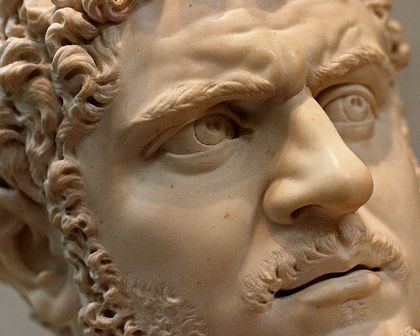 Seriously, bruh? Couldn’t wait until I was finished?!

Emperor Caracalla falls among a long line of dickish Roman Emperors who, if anyone recalls his name at all, will be forever remembered in infamy for good ol’ fashioned tyranny and the pathetic way in which he met his end.

But this same emperor made many mistakes because of the obstinacy with which he clung to his own opinions; for he wished not only to know everything but to be the only one to know anything, and he desired not only to have all power but to be the only one to have power. Hench he asked no one’s advice and was jealous of those who had any useful knowledge. He never loved anyone, but he hated all who excelled in anything, most of all those whom he pretended to love most; and he destroyed many of them in one way or another. [1]

-Cassisus Dio. On Caracalla but without the context, could easily be confused for a different modern leader of today.

Following the reign of his father Septimius Severus, the dude who JK Rowling probably named Snape after, Caracalla began a joint rule with his brother Geta in 211 AD until he had him murdered because he just didn’t like to share or settle differences in a reasonable manner because what Roman Emperor needs to possess sound judgment? But even before this moment, Caracalla had already started his laundry list of assholery that began with the exile and murder of his wife, whom sources aren’t entirely sure why he hated so much (and keep in mind divorce in Rome at this time was quite common), and her father for being responsible for half of her gene pool. [2] To make matters worse, after Caracalla had his younger brother gutted in the arms of their own mother, he went on to order a damnatio memoriae which attempted to erase his name and memory from public record and history. Anyone who had a problem with the murder or even spoke Geta’s name out loud was rounded up and murdered. All in all, an estimated 20,000 people were killed over an affair that could have probably been solved with a nice family chat over wine. [3] So clearly, Caracalla was a fun guy to be around.

When the Egyptian population was touched by Caracalla’s heavy handed politics, they rebelled by their sense of humor of making Caracalla the object of their satire. Jokes and puns were devised on his account, to which Caracalla was not a ready audience… [3]

– Robert Morgan, History of the Coptic Orthodox People and the Church of Egypt.

(In response, Caracalla tricked the City of Alexandria into a display of extended respect by promising to pick from the city’s youth to back fill the employ of his legions. When the candidates had eagerly gathered to await their choosing, Caracalla ordered his soldiers to slaughter the entire crowd.)

I wonder how many people peed in these.

Not everything he did was entirely shitty, however. He built baths in Rome which are essentially the ancient equivalent of a YMCA, paid his military handsomely, and issued the edict of Constitutio Antoniniana which gave all freed men living in the borders of the empire Roman citizenship. [4] There were some exceptions of course, but this was a big deal because at this time Rome was at the height of its expanse, with only a small percentage of the population enjoying all of the benefits of being a true Roman, which included protection from being crucified as capital punishment.

This is only one hundred years before Caracalla. That’s a whole lot of taxes.

But like all things in Carcalla’s life, when he was spurned, his immediate response was to kill things. So when he offered a marriage alliance between himself and the daughter of a Parthian king in an attempt to gain more territory for Rome but was rejected, he responded by launching a military campaign to take it by force with bloodshed. [1]

It was on one of these campaigns when Caracalla couldn’t resist the urge to urinate. Stopping off the side of the road to relieve himself, a disgruntled soldier unhappy by his lack of promotion approached him unnoticed. Apparently not even giving the emperor a chance to finish, the soldier stabbed Caracalla in the back shoulder until he fell dead, but hopefully not on his newly relinquished stream. [5]

Cause of Death: Inopportune bathroom break

[5] Herodian, History of the Roman Emperor Since the Death of Marcus Aurelius; Murder of Caracalla. Via URL: http://www.livius.org/sources/content/herodian-s-roman-history/herodian-4.13/?