You know who Mozart is. I shouldn’t need to spend any time explaining that in the 18th century, a musical prodigy was born in Salzburg, Austria, to a chapel director/violin teacher. That this little ruffian was learning the harpsichord at the age of 3 and not a year later was mastering the violin and displaying a proficiency for arithmetics, and that by age 6, had composed his first concerto. [1] You’ve heard his most famous works; Allegro, The Magic Flute, The Marriage of Figaro, Don Giovanni, Requiem, to name a small few. You’ve maybe also heard some crackpot theories about Salieri murdering him rather than one of the possible 140 causes of death scholars are still quibbling over. [2]

What is perhaps not as well known about the eccentric powdered Mozart is his obsession and love affair with…crap.

“Lectu mihi mars” or “Leck du mich im Arsch” (For those who don’t know the fun parts of German, “Lick My Arse”)

Indeed, when it was discovered in some of his letters and manuscripts that Mozart had a propensity for fecal preoccupation, there was some embarrassed rejection of the material by later family and scholars of the 19th century (See Victorian prudes)–how could a genius such as Mozart, write about passing a bowel movement on his cousin’s nose? [3] Even Margaret Thatcher, U.K. Prime Minister, wasn’t pleased with the reality of a famous classical composer degrading himself with potty humor and refused to believe it factual. [4]

But the fact of the matter is, it runs in the family.

We lead a most charming life, up early, late to bed, and visitors the whole day; we live like princes. Addio, ben mio, keep well. Stretch your arse up to your mouth. I wish you good-night; Shit in your bed with a resounding crash. It’s already after one o’clock; now you can keep making rhymes yourself.

A leading theory to account for Mozart’s affinity for scatology is to assume he was a sufferer of Tourette’s syndrome–A disorder characterized by involuntary tics, movements, and vocalizations–as a defensible explanation for why Mozart insisted on writing limericks about ‘licking arses’ while he was busy writing and composing some of the most famous operas in existence. Despite gaining traction in the public mindset, however, this theory has been largely debunked. [6] As Mozart would say, what a load of shit.

Notably, there doesn’t appear to be a credible primary source to ascertain Mozart suffered from involuntary tics or movements, nor does simply writing potty jokes in letters translate at all to the coprolalia symptom present in only 10-15% of those diagnosed. [7] In short, Mozart was just a bit of an oddball not unlike other weirdo geniuses, and attempting to diagnose him retroactively, ignores another layer of his cleverness–even if it is about things best left in the toilet. The letter quoted below, which Mozart wrote to his cousin, is one such example. It contains a proficiency in alliteration, mirror construct, synonyms, echo effects, lyrical syntax, and, well, poop. [8]

I have received reprieved your highly esteemed writing biting, and I have noted doted that my uncle garfuncle, my aunt slant, and you too, are all well mell. We, too, thank god, are in good fettle kettle. Today I got the letter setter from my Papa Haha safely into my paws claws. I hope you too have gotten rotten my note quote that I wrote to you from Mannheim. So much the better, better the much so! But now for something more sensuble [sic].

So sorry to hear that Herr Abbate Salate has had another stroke choke. But I hope with the help of God fraud the consequences will not be dire mire. You are writing fighting that you’ll keep your criminal promise which you gave me before my departure from Augsburg, and will do it soon moon. Well, I will most certainly find that regrettable. You write further, indeed you let it all out, you expose yourself, you let yourself be heard, you give me notice, you declare yourself, you indicate to me, you bring me the news, you announce onto me, you state in broad daylight, you demand, you desire, you wish, you want, you like, you command that I, too, should could send you my Portrait. Eh bien, I shall mail fail it for sure. Oui, by the love of my skin, I shit on your nose, so it runs down your chin… 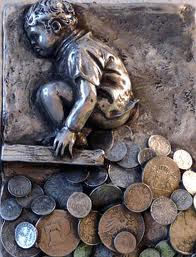 So to all those parents out there hoping their little baby will be the next concerto prodigy just remember that your kid already has something in common with Mozart: They both giggle when they flatulate. Or, mothers, you’ll know it when you receive this beautiful loving poem from your child pinned to your pillow.

On Monday, I will have the honor of embracing you and kissing your hand

[9] Dundes, A. & Pagter, C. (1978) Work Hard and You shall Be Rewarded: Urban Folklore from the Paperwork Empire. Retriever from books.google.com