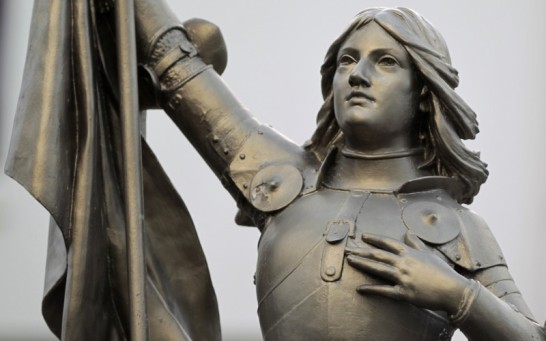 Comedy Central dropped a hilarious clip yesterday from Drunk History on Joan of Arc, which for the un-initiated, is a show where comedians get completely smashed and re-tell something that happened in History. Then their drunken stupor of history facts is dubbed over and re-enacted by other comedians. Basically, the perfect show for me.

Aaaand that’s pretty much the gist of what happened! Knowing me though, I felt like offering a bit more context for those who were smitten to know more about the raging Maiden of Arc.

Born in 1412, France and England were already more than half way through The Hundred Year’s War when Player Joan Entered The Game popped up in a peasant village. The war itself is more complex than simply contextualizing it to an inheritance dispute over the French crown, but I’m writing a blog post here, not a book. Suffice it to say, the English royal family lay claim to Northern France/Normandy pretty much since its inception, having been descended from the Normans through William the Conqueror. There was quite a bit of intermingling between royal houses up to this point enough for there to be some legitimate contention when a king would leave the world with only a daughter, unable to inherit. By the 15th century, England had pretty much crowned itself France by way of the Treaty of Troyes–which disinherited France’s Charles VI’s heir in favor of the English king Henry V and his heirs since he married the French princess Catherine of Valois and all. King Charles VI was a notorious lunatic at this point, having randomly slaughtered his garter of knights in a fit of madness, believing he was Mr. Glass (probably from that awesome M. Night Shyamalan movie), and otherwise being a royal pain in the ass. There wasn’t too much sadness to see his family’s claim go to hell, unless, of course, you were part of House Valois. [2]

Hence the war. Try as it might, France wasn’t doing that great of a job at defending its titles or land. Henry V had mopped up most of what he sought for territory by the time he got taken off the planet by a bout of furious diarrhea (I’m serious, Kingslayers fans). Take that and the Black Death into hand, and France wasn’t really in any position to turn away an illiterate, bowl-cut 17-year old girl in drabby men’s clothing who showed up claiming to have heard divine voices in a forest that told her to help win the throne back to Charles VII, the disinherited son of Glassy McMadKing. They were basically like, eh, what the hell, and sent her off into battle to hopefully make some kind of dent in the Battle for Orleans because it’s not like they were going to lose any harder than they already were.

Thankfully, Joan turned out to be exactly the godsend she claimed to be. The English had laid siege to Orleans, one of the last French strongholds in the war, and everyone was pretty sure it’d fall. But the participation of Joan was like a beacon of hope among the French army not unlike Aaron Rodgers is to the Green Bay Packers. Whether she was simply running amok with a banner or truly engaging in battle with the supposed sword of the legendary Charles “The Hammer” Martel and soaking it up in that English blood, her presence alone was enough to bolster the French forces to victory. Joan had even taken an arrow between her neck and shoulder blade yet still charged along with the assault like nothing had happened. The English retreated the very next day and Orleans was saved. [2]

Probably the most gorgeous painting I’ve ever seen. Entrance of Joan of Arc into Reims in 1429, painting by Jan Matejko

Joan was apparently impressive enough to dazzle the other commanders, and the would-be King Charles VII, that all listened to her council and war advice from then on. She seemed to anticipate events like a Jedi Knight and kept surviving ridiculous wounds like a stone crashing into her head and a crossbow bolt to the knee (yes, that was a Skyrim joke.) For all anyone knew, she really could have been divine by her continued miraculous display on the battlefield. [3]

You men of England, who have no right in this kingdom of France, the King of Heaven orders and commands you through me, Joan the [Maiden], to abandon your strongholds and go back to your own country. If not, I will make a war cry that will be remembered forever. – Joan’s other favorite past time was leaving threatening letters glued together with newspaper clippings. [2]

Eventually, however, Joan’s good luck came to an end when she was captured by Burgundian forces while defending the city of Compeigne. Joan didn’t care much for being imprisoned and repeatedly attempted to escape, on one occasion, jumping from the 70-foot tower she was held in. I mean, yeah, I can kinda see now why the English got away with condemning her for being that kinda crafty like a witch. The French were super pissed and Joan was tried in an ecclesiastical court which was determined to trap her into confessing to heresy. I posted a copy of the transcript on my blog before for those curious to see how it all shook out, but basically Joan sassily dodged the clergy council’s interrogations so well, they could only really manage to get her on cross dressing charges to which she wouldn’t deny. Cross-dressing was seen as an unholy abomination and therefore, to do it repeatedly, was itself a mark of heresy. Despite Joan’s explanation, that dressing in male garb afforded her the safety from molestation and rape (Sounds fair and reasonable to me, it was the Middle Ages after all), her enemies ran with it and condemned her to death by burning. [1]

Joan was burned to cinders on May 30th, 1431. Despite their condemnation of Joan as a Heretic, the English apparently still feared her divine powers and burned her a few more times just to make sure she hadn’t escaped somehow. Then they tossed her ashes into the Seine so no one could collect her remains as relics afterwards. After the war, the trial was appealed and an investigation led the conviction to being reversed and Joan was declared innocent. Surprisingly, Joan of Arc wasn’t to become St. Joan until recent. She wasn’t canonized until 1909.

Anyway, can we get a TV mini-series on Joan of Arc played by Sophie Lillis?

Jones, D. (2015). The Wars of the Roses: The fall of the Plantagenets and the rise of the Tudors.

4 thoughts on “Joan of Arc: Drunk on the Divine”

Leave a Reply to Simply Dee In D.C. Cancel reply