No one really expects a film based on a graphic novel based on a historical event to remain loyal to the latter. Source material taken from any form whose primary audience pounds out their vicious objections to any embellishments on a keyboard caked with Doritos residue and the sticky remains of a novelty energy drink, is going to be taken more seriously than a few scattered nerds nose deep in Herodotus’ The Histories. Mostly because the first group has the unique and senseless ability of lambasting anything they love to hate with enough down-votes across social media, even Mussolini would feel popular. So with the now swiftly approaching release date of Warner Bros’ 300: Rise of an Empire, I doubt anyone is supremely concerned with historical accuracy. I’m guessing the main discussion sparks with a critique of slow-mo, how realistic and plentiful painted abdomens will be, and a nostalgic exchange of celebratory memes. But if there is one thing I really do hope, nay, EXPECT, the movie to get right, is the characterization of Artemisia.

For a film promising to portray itself in an epic scope and deliver on all that delicious violence and bloodshed, there really isn’t an absence of it in the source material. And when it comes to Artemisia, no one, not even thousands-of-years-dead historians, can deny that she was a sassy man-trouncing Mutha’Amourous Congresswoman‘.

Artemisia was queen of the Persian providence of Caria, which she gained because her son was still a noob-fledgling after her husband died. Clearly, nobody gave a shit about him though because I never came across a name for the father, or even the son for that matter, in my readings. And who the hell would when Artemisia was bringin’ the feminism as the only female naval commander in a time period when women were expected to cover themselves to protect their chastity. (Apparently, Cyrus the Great’s influence…clearly not in relation to Miley Cyrus as she believes in neither of those things)

Her story predominately begins with the various re-tellings of the Greco-Persian wars, which for the folks who are here because of 300, are the collection of battles between Persia and the city-states of the Greek world. Not much is really known about Artemisia’s life beyond what battles she contributed her skill in and Herodotus offers little insight beyond an awe of confusion over her presence at all given this text:

There is no need for me to mention all the other subordinate officers, but there is one name which I cannot omit—that of Artemisia. It seems to me a marvel that she—a woman—should have taken part in the campaign against Greece.

But since he was Greek, there’s really no surprise there. Actually, I would infer that because Herodotus himself was born in Halicarnassus of Caria, then under the rule of Artemisia’s grandson continuing a somewhat familial regional legacy, he would find her loyalty surprising given his own rather than in full part because of any misplaced view on women. Clearly, he did have some respect for her, referring to her reasons for joining under Xerxe’s command as

there was consequently no necessity for her to do so. Her own spirit of adventure and manly courage were her only incentives.

But that probably has to do with the common association of comparing her accomplishments to that of a man and not a woman, which I will show more of in a bit. Either way, despite her gender, she was well known for her wisdom and intelligence, being one of Xerxes’ most promising advisers. Right before the (SPOILER ALERT: “ill-fated”) Battle of Salamis, Xerxes sent his lead military commander Mardonius [Remember this quote, guys?] to each one of his fellow commanders to retrieve their advice for the king on their opinion about raging a sea battle against the Greeks. Every single one of them, save for Artemisia, was in favor of engaging in the tactlessly arrogant attack. Without missing a beat or sparing offense, she is said to have replied with these ‘kind’ words;

Mardonius, tell the king for me that this is the answer I give—I, whose courage and achievements in the battles at Euboea were surpassed by none: say to him, “Master, my past services give me the right to advise you now upon the course which I believe to be most to your advantage. It is this: spare your ships and do not fight at sea, for the Greeks are as far superior to your men in naval matters as men are to women. In any case, what pressing need have you to risk further actions at sea? Have you not taken Athens, the main objective of the war? Is not the rest of Greece in your power? There is no one now to resist you—those who did resist have fared as they deserved. Let me tell you how I think things will now go with the enemy; if only you are not in too great a hurry to fight at sea—if you keep the fleet on the coast where it now is—then, whether you stay here or advance into the Peloponnese, you will easily accomplish your purpose. The Greeks will not be able to hold out against you for long; you will soon cause their forces to disperse—they will soon break up and go home. I hear they have no supplies in the island where they now are; and the Peloponnesian contingents, at least, are not likely to be very easy in their minds if you march with the army towards their country—they will hardly care to fight in defense of Athens.
If, on the other had, you rush into a naval action, my fear is that the defeat of your fleet may involve the army too. And put away in your heart on other point, my lord, to be considered: good masters, remember, usually have bad servants, and bad masters good ones. You, then, being the best master in the world, are ill served: these people who are supposed to be your allies—these Egyptians, Cyprians, Cilicians, Pamphylians—are a useless lot!

The rest of the commanders held their breath, sucked in their retorts if they were included in the closing insult, or waited eagerly for Xerxes to put her silly inferior brain in place. Too bad for them though, that Xerxes, who usually has such sound judgments more in line with their intellectual capacity, greeted Artemisia’s opinion with the most highest of esteem, in fact notably encouraging her with more favor for giving such an admirable and sound advising. However, though pleased with Artemisia’s skepticism, Xerxes’ astronomically amorphous ego was certain that his presence alone would foster victory where it had since lacked. And so the Battle of Salamis was soon underway. 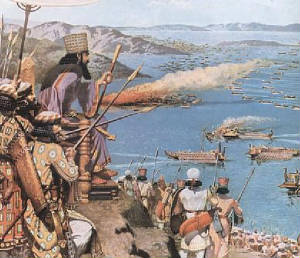 “WHY ISN’T MY FACE MAKING THEM WIN?!”

So, presumably not all that begrudging given her affection for baddassery, Artemisia sailed into battle regardless. According to Polyaenus (A Macedonian author who dedicated one of his works to Marcus Aurelius *bravo*), in battle, Artemisia’s long ship carried different flags, Greek, Barbarian, etc. which she would fly intermittently given her chosen enemy, the ability to sneak attack unawares. She used this technique in full when, after her comrades and allies fell apart in abstract chaos in the wake of their combined utter defeat, she found herself being chased by an Athenian Trireme with no chance of escape as she was completely surrounded by enemy and friendly ships alike. Throwing up the colors and ramming a friendly ship captained by the king of Calynda, Damasithymus, she made herself appear an ally, which led the Athenian Trireme to give up the chase and let her free. It is said too that, technically, Artemisia killed two pigs with one stone in that single maneuver, as apparently, she and Damasithymus quarreled earlier during the campaign and he was now…well, sunk and dead. Herodotus couldn’t fully comment whether there was malice in her intent. But you know what they say about a woman scorned…

Artemisia’s act of ingenious revenge was witnessed by Xerxes and his camp of overlookers forcing him (and Herodotus) to fall more deeply in respect for her than ever before. Because that was freaking awesome. Xerxes famously saying:

My men have turned into women and my women into men.

And since Artemisia was the only woman in that battle, we all know what he really meant. You go, girl.

After the crushing defeat, Xerxes wondered out loud, again, what he should do next. And despite Mardonius’ insistence to continue an invasion of Greece and the Peloponnese, Xerxes’ was eager to follow Artemisia’s advice. Which, after calling Mardonius a slave a few times for good measure, convinced the King to return home to safety which he was more than happy to oblige. He sent Mardonius off to battle (and further failure) and Artemisia with compliments and his sons to Ephesus.

And so concludes the exploits of Artemisia. Living on in name for an Iranian destroyer and as one of the titular characters in a Hollywood blockbuster movie.